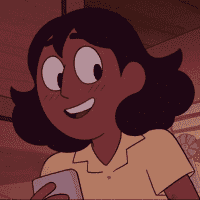 Connie Maheswaran is a native of California, USA.

"It's impossible trying to solve problems if we're just trying to copy other people. Oh, what's the point of this? We'll never be the Crystal Gems, we're just... the Crystal Temps. But we have our own way of doing things. So let's go back to that, to fix this mess we made."

Originally shy and introverted, Connie rarely stayed in one place for long due to her parents' lifestyle and thus had been unable to form lasting friendships, which left her frequently feeling lonely. Her parents were very strict and didn't allow her to participate in common childhood activities, such as eating donuts or anything with trans fats and organize her daily activities.

Up Next
Bill Dewey Personality Type