Anna personality type is ENFP, and her dominant function is Extraverted Intuition.

By the way, when I described this personality type in the intro, I said it’s an “all-or-nothing” type. That’s because the ENFP has both a positive and a negative pole — the Introverted Feeling side and the Extraverted Intuition side. The E is the positive pole, and N and P are the negative pole. Here’s what I meant: 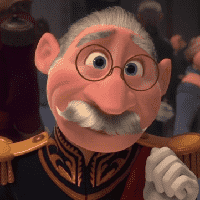 Up Next
Duke of Weselton Personality Type