Demon Slayer: Kimetsu no Yaiba (Japanese: 鬼滅の刃, Hepburn: Kimetsu no Yaiba, lit. Blade of Demon Destruction) is a Japanese manga and anime series written and illustrated by Koyoharu Gotōge. The story follows Tanjirō Kamado, a young boy who becomes a demon slayer after his entire family was slaughtered by a demon, except for his little sister Nezuko, who was turned into a demon as well, vowing to find a way to make her human again. It has been serialized in Weekly Shōnen Jump since February 2016, with its chapters collected in 17 tankōbon volumes as of October 2019. The series is published in English by Viz Media and simulpublished by Shueisha in English and Spanish on their Manga Plus platform. 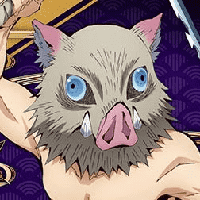 Up Next
Inosuke Hashibira Personality Type