Tambry personality type is ISFP, as this personality type is often found to have a strong sense of justice and justice for those that others may not be as just as them. ISFPs tend to take what they believe to be right and stick to it, no matter how much it may upset others. When dealing with a situation, the ISFP will tend to have a very strong moral compass and will typically be very outspoken in their beliefs.

Tambry is in many ways a stereotypical teenager. She enjoys texting and using social networking sites to constantly update her status, even more so than other teens, and rarely looks up from her cellphone, as seen in "The Inconveniencing." She tends to be downbeat and apathetic to most things, giving off a somewhat gloomy demeanor. Robbie is the only person for whom she has shown more interest in than her phone. 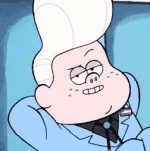 Up Next
Gideon Gleeful Personality Type