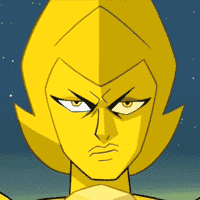 Yellow Diamond personality type is ESTJ, or Extraverted, Sensing, Thinking, Judgmental. ESTJs are goal-oriented and organized. They like to be in charge and like to make sure things get done. They make decisions and stick to them. They like to be in control and at the helm of any activity.

More about the ESTJ type here.

If you’d like to explore the Myers-Briggs® system in more detail, I’ve created a free Personality Type Assessment.

Are you an Indigo?

Are you a creative, spontaneous, and imaginative person? Then you may have a strong connection to the Indigo personality type. The Indigo personality type is INFP, or Introverted, Intuitive, Feeling, Perceiving. INFPs are sensitive and creative individuals who are intuitive and sensitive to the needs of others. They have a great capacity for empathy, creating a warm and friendly person.

More about the INFP type here.

Homeworld reputes Yellow Diamond as a perfectly logical and rational leader, though in reality, she is vindictive and quick to anger. When her followers contacted her but failed, she is rather annoyed but will offer them multiple chances to redeem themselves. Yellow is shown to have a blunt and "down-to-business" attitude, taking over the call Peridot was having with her Pearl to get the message that the former had quickly. She tells Holly Blue Agate to "get to the point" when she begins to ramble on, something which she did again with the prosecuting Zircon's praises. She also kept pushing to shatter Steven/Rose and get the trial over with.

Yellow Diamond has a dangerous and lethal temper, treating an act of disrespect against herself or her fellow Diamonds with aggression and violence. This was shown when she detonated the Diamond Communicator with the hopes of destroying Peridot and when she attacked both Zircons. Yellow is shown to get fed up when anyone disagrees with her beliefs