Annie Leonhart personality type is ISTP, according to the Myers-Briggs Type Indicator.

Annie's gender is still disputed. In "", Annie was seen with a deep voice, thus the voice actor for the character is a man. In "", Annie had a deeper voice. In "", Annie's voice is now lower than in "".

It is possible that Annie's gender is non-binary or an androgyne.

Annie Leonhart is a graduate of the 104th Training Corps and former member of the Military Police Brigade. Her exceptional skills with swords and unarmed combat earned her the 4th rank, but she is also noted to be a lone wolf who struggles to work with others. She possessed the ability to transform into a Titan known as the Female Titan. Trained from an early age by her father, she is selected as one of Marley's Warriors. In the year 845, she is sent on a mission to retrieve the Founding Titan, along with fellow Warriors Reiner Braun, Bertolt Hoover, and Marcel Galliard. As the Female Titan, she serves as a major antagonist prior to her defeat, at which point she crystallizes herself and is left in a comatose state. 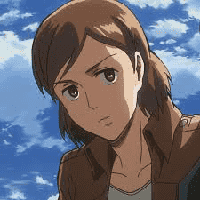 Up Next
Anka Rheinberger Personality Type